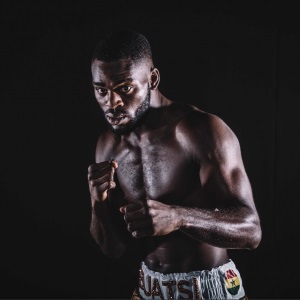 Joshua Buatsi (born 14 March 1993) is a Ghanaian-born British professional boxer. He has held the British light heavyweight title since March 2019. As an amateur, he won a bronze medal in the light heavyweight division at the 2016 Olympics in Rio de Janeiro, Brazil.[1]

Buatsi was born on 14 March 1993 in Accra, Ghana.[2] After his family moved to the UK, they resided in Croydon. Buatsi studied at Edenham High School. Buatsi graduated with a 2:1 degree in Management with Sports Science from St Mary's University, Twickenham, while also competing as an amateur boxer.[3]

At the 2016 European Boxing Olympic Qualification Tournament held in Samsun, Turkey, Buatsi defeated Ukraine's Oleksandr Khyzhniak in his semifinal and Dutch boxer Peter Müllenberg in the final of the light-heavyweight tournament to secure his place in Rio as part of the Great Britain team.[3][4]

At the 2016 Summer Olympics in the men's light-heavyweight competition, he defeated Elshod Rasulov of Uzbekistan with a third round knock-out, to progress to the quarter finals.[5]

Buatsi made his professional debut on 1 July 2017, when he fought Carlos Mena at The O2 Arena. Buatsi won the fight by knockout in the second round. He next fought on 1 September against Baptiste Castegnaro, winning by knockout in the fifth round. On 28 October 2017, on the undercard of Anthony Joshua vs. Carlos Takam at the Principality Stadium in Cardiff, Wales, Buatsi fought Saidou Sall in a six round bout, winning the bout 60-54.

Buatsi’s first fight of 2018 was against Jordan Joseph, he won the bout by stoppage in the second round after Joseph’s corner threw the towel in. He went on to defeat Bartlomiej Grafka 60-54 over six rounds on 31 March and Stephane Cuevas by knockout in the fifth round on the undercard of Tony Bellew vs David Haye on 5 May.

On 23 March 2019, Buatsi defeated Liam Conroy via technical knockout in round three to claim the vacant British light heavyweight title at the Copper Box Arena in London, England.

Get emailed the latest fixtures